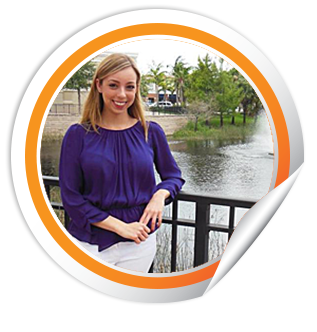 During February, Alexandra Richter was a busy woman as director of the American Heart Association’s Go Red for Women for Palm Beach County. Her calendar was packed with activities, events and meetings, all dedicated to the promotion of heart health. The only problem was that Alexandra was failing to schedule time for her own heart.

"I'd been recently promoted to this position, and I was going a mile a minute to make sure everything was perfect, despite the fact that my body was telling me to slow down," Alexandra says.

The symptoms were disruptive but easy for Alexandra to misinterpret. Mild loss of vision and exhaustion didn't signal to her that something was seriously wrong.

"I thought it was somewhat normal with how busy I had been, and I was almost embarrassed to ask for medical care," she says.

Her reluctance to seek medical care soon changed, however, just before Valentine's Day.

"I remember it clearly. I was sitting in a meeting at work when I started to feel the same symptoms of fatigue and vision loss, but this time it was different. They were so severe that I couldn't ignore them," she says. "I excused myself to go to the bathroom, but I never made it. I fainted, and my supervisor immediately called 9-1-1."

The next thing she knew, Alexandra was waking up in an ambulance in disbelief. She felt shy about the level of medical attention the paramedics were giving her, but once she arrived at Palm Beach Gardens Medical Center, she began to grasp the seriousness of her condition.

After the medical staff had completed testing, Alexandra was diagnosed with rhabdomyolysis, a serious heart condition in which the muscle fibers break down. Alexandra notes that she might have been able to better manage the condition if she’d been taking better care of herself and acknowledged the symptoms.

"Even though I worked in health care, I was only 22 years old, so I thought it was impossible something could be wrong with my heart. I was sleep deprived, exhausted and dehydrated," she says. "That is when it hit me: It’s one thing to be sent to the hospital for things that are out of your control, but I could have prevented this. I made a promise to myself to never let something like this happen to me again."

"I was so impressed by the immediate and compassionate care I received," Alexandra says. "The staff members were extremely attentive, and I felt comforted by their patience and consideration."

The modern woman is always on the go, sometimes overlooking her well-being. In her former role at the American Heart Association, Alexandra spent a lot of time thinking about matters of the heart. Since her health crisis, she's now learning to think more about her own. She's learning to listen to her body and get adequate rest.

"I want to thank the staff at Palm Beach Gardens Medical Center for reminding me about the importance of taking better care of myself," Alexandra says.