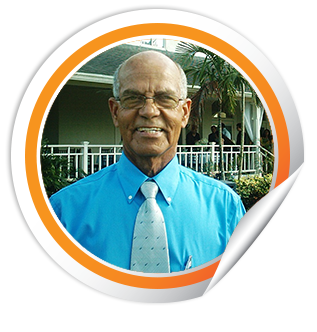 Jerry Ryan is living out his "Golden Years" in Sebring, Florida, with his wife of nearly three decades. They were enjoying the time they spent with their three children, seven grandchildren and two great-grandchildren.

Taking good care of himself was one way Jerry showed his love for his family. He regularly exercised and saw his doctor for quarterly checkups. So when he started to have digestive problems and constant constipation, he grew concerned.

"One day, I noticed blood in my stools. I knew I had to figure out what the issue was. My doctor checked my colon and saw I had precancerous polyps that needed to be surgically removed immediately," Jerry says. "I decided to see Dr. Ramon Vazquez, who cared for my father-in-law at Palm Beach Gardens Medical Center."

Jerry was very concerned about being cut open, but Dr. Vazquez reassured him by telling him about a robotic surgical option available at the hospital. The da Vinci® Surgical System would make small incisions to take out what turned out to be six inches of his colon and, best of all, would lead to minimal scarring.

"Dr. Vazquez said the procedure would only take an hour, and the robotics machine would allow me to have a quicker recovery time, so I could get back to trying to keep up with my grandchildren. How could I pass that up?" he says.

Jerry spent a mere five days at Palm Beach Gardens Medical Center before coming home and being with his family again. Just three months later, he was back to doing all the things he used to do before the surgery.

Jerry is relieved that his surgery went so well: "Thanks to the robotics procedure at Palm Beach Gardens Medical Center, I can enjoy the many Golden Years ahead and watch my family continue to grow."